And speaking of whining 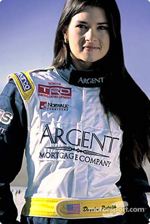 So Robby Gordon is complaining that Danica Patrick has an unfair advantage due to her weight (100lbs). Good Lord man, I thought race car drivers were big tough guys who muscled their way around in circles using fast, heavy, macho machinery. Along comes a pretty girl, practically kicks everyone’s asses on the track and suddenly Gordon sounds like a seven-year-old who had his ice cream cone taken away. He’s refusing to race “… until the IRL does something to take that advantage away.”

Now I’m guessing the Indy folks will eventually force the weight to be even, like with jockeys, but c’mon guys don’t whine about it. I hope she kicks your ass after they even things out. Then what?

You realize the same thing happened to me when I was playing professional basketball. Shaq was so tall it gave him an unfair advantage. The NBA refused to do anything about it, so I walked away. Neener neener.