Wadman on Frank and The Americans

Bill Wadman on Robert Frank’s The Americans at The Met

That’s 1000 selects, which had probably gone through quite a distillation process to even get there. Let’s figure that he chose maybe one image per roll on average, so that’s like 20,000 images over the course of two years driving around the country. Anybody is going to take some great pictures (though I’d like to say that as a rule, the images were not very good from a technical point of view. Often soft in focus, obviously heavily cropped from a larger frame, look like they had to be saved in the darkroom with lots of dodging and burning, etc. but I digress) So give a camera to your average joe and have him shoot 20,000 pictures over the course of 2 years, at a time when people didn’t have the same phobia of getting their pictures taken as they do now, then distill out the best 83. I’m pretty sure you’re going to get a decent sampling just by chance. 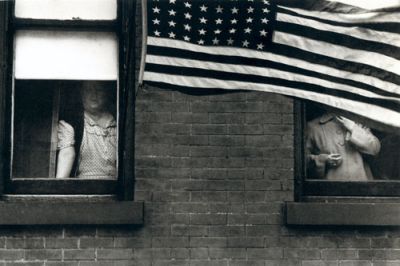 “Anybody is going to take some great pictures,” he says. I’m not sure about that, but to find out, you’d first have to make the effort to travel around a new country for a couple of years and actually take 20,000 photographs. That is the hard part, and should not be taken lightly.

When looking at most photographs, I don’t notice, or care much about, the “technical quality.” Technical quality is irrelevant to something like The Americans. I think too many photographers spend too much time worrying about the technical aspects and not enough on making good images. Wadman is a good photographer, and his images bulge with technical quality, but they don’t move me like Frank’s. I suppose, like most things, it’s a matter of taste. 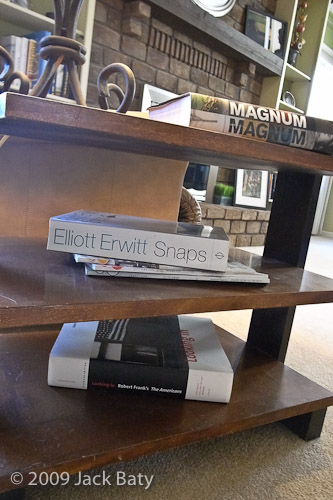 The table by my reading chair, as of this morning. I love The Americans.

Updated on Sunday, Nov 15, 2009
photography
Back | Home
Marco Arment on his new Magic Mouse Life in the Time of Virtual Photography