When my grandfather left me the entire Grand Rapids Amateur Movie Club library I promised I would work to preserve them and some day transfer them to digital. As you can see, there are quite a few films, in both 8, Super 8, and 16mm formats.

Cabinet containing most of the GRAMC films

A few years ago I made my first attempt at transferring them using movie mode on a digital camera pointing at a projection screen. This worked in that it created a digital version of the films but the quality was of course terrible.

I then tried a local company which did conversions. The quality was somewhat better but it took them too long and the cost was too high. I could send them out to something like ScanCafe which does a great job. The trouble with that is I don’t believe they return the films on the original spools, which is a requirement. They are cheaper, but transferring everything would still be expensive. Besides, I kind of want to handle everything myself. These films are important to me.

While researching Telecine options I ran into the Retro-8 frame-by-frame scanner from MovieStuff. I’ve decided that this is the way to go. I have a unit ordered and should have it in 60 days or so. 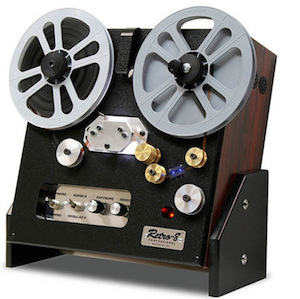 The plan is to get everything transferred and resell the unit. The problem with that plan is that if it works well I won’t want to sell it, even when all of my films have been transferred. I will probably want to transfer films for other folks who are in the same situation as me. Preservation of family and other histories is important and this is something that could help. Yes, I’m rationalizing a purchase, but my intentions are good!