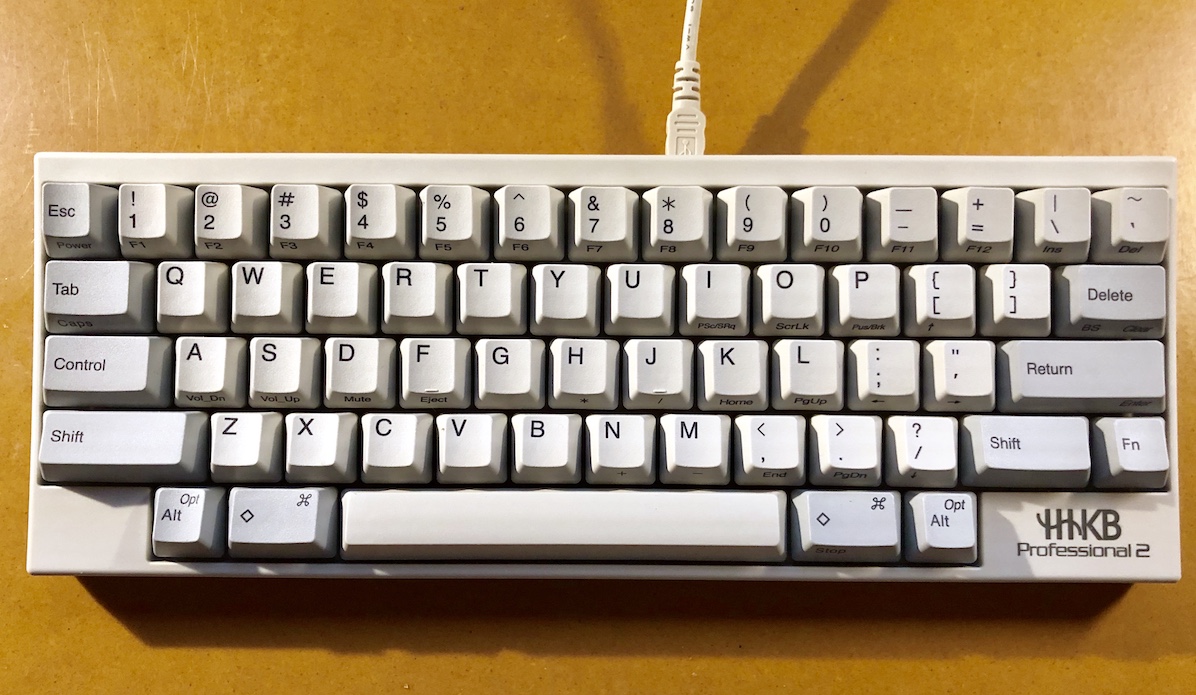 I don’t want to write a review of the Happy Hacking Keyboard Professional 2 but I do want to mention that I love it. I’ve been using it for a week, which means I’ve gotten past most of the getting-used-to-it process. Before getting the HHKB I had no idea what Topre switches were, but they’re awesome.

I’m not a keyboard expert, but I am fussy about how a keyboard feels. I prefer mechanical keyboards1. I used an Apple Extended Keyboard II for years but it’s huge and clumsy and I was looking for something smaller. Also, the physical Caps Lock button on the AEKII made it impossible to use Caps Lock as a Control key.

I used the first version of Das Keyboard liked it very much. It eventually failed and I started using the Apple Magic keyboard instead in an attempt to make my desktop experience closer to the iPad keyboard. The Apple keyboard is fine, but I wanted to go back to something mechanical, something better.

The HHKB though, wow. It’s way better. It feels nearly perfect to me. I haven’t measured, but it feels as though I’m very fast and accurate with it. I like the feel of the keys so much that I wouldn’t care even if I wasn’t fast and accurate.

I opted for the white version because I was worried that the dark grey one, as cool as it looks, would be hard to read. I’m not cool enough to have a keyboard I can’t read.

I’m still getting used to having the tilde key at the top right rather than top left. And the Delete (or Backspace, depending on the configuration) key is almost-but-not-quite close enough to reach with my right pinky. I’m trying to train myself to use the pinky because that would mean even less arm movement, but it’s slow going.

The hardest thing to get used to is that the arrow keys are on the function layer. Not having dedicated arrow keys is challenging. The idea is that I can easily reach the function key with my right pinky, then use the first two fingers to manipulate the arrow keys. It’s a fine idea, but it’s not coming naturally to me yet. Whenever I need to use an arrow key, I have to stop, look at my hands, and reposition them carefully. I’ll get it, but it may take a while before it’s comfortable.

The only complaint I have is that the thing slips around on the desk too easily. There are rubber feet on the front side of the bottom but they aren’t sticky enough. I stuck a couple of thin plastic feet on the rear of the bottom and that’s solved the problem.

I was a little worried about spending so much money on a keyboard that I had never tried, but the HHKB exceeded my expectations. I love typing on this thing.

Updated on Tuesday, Apr 10, 2018
hardware
Back | Home
Headlines making you anxious? Delay reading them - Oliver Burkeman Getting the GTD Band Back Together